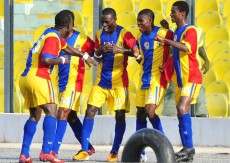 Hearts have confirmed twelve players have been offloaded for non-performance.

Head coach David Duncan has embarked on a massive clear-out as he seeks to restore the team back to the top of Ghana football.

Experienced winger Douglas Nkrumah as well as Prince Attakorah-Gyimah who joined from All Stars have been told their services are no longer required.

Yusif Alhassan, Abdul Ganiyu, Karim Sadat, Moro Iddrisu, Paapa Hayford and Baa Boateng have all been affected by the reshuffle.

“Hearts have officially put 12 players on the transfer-list. We have agreed to mutually terminate their contracts so they can look for new clubs,” PRO Muheed Saed told Accra-based Peace FM

Hearts have already made their first major signing after striker James Bissue joined from Israeli second-tier side Hapoel Be’er Sheva.