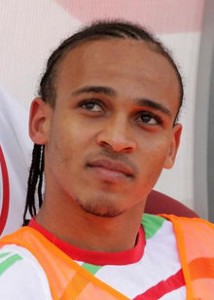 Peter Osaze Odemwingie is reportedly “delighted” that he will stay put at West Bromwich Albion during next month’s Afcon in South Africa.

The Albion striker was one of high-profile players missing from Nigeria’s provisional squad for the Africa Cup of Nations and his manager at the English club, Steve Clarke has disclosed that Odemwingie is ready to help the Baggies.

Clarke, however, did not fail to mention that Odemwingie is “obviously slightly disappointed” to have been left out of the Nigerian squad after making “himself available” but will now focus on helping West Brom.

“Peter made himself available for Nigeria and they chose not to pick him.

“He is obviously slightly disappointed that they have made that choice but he is delighted that he can stay and help us.

“I spoke to him and it is the choice of the Nigerian coach and he respects that choice. But he looks forward to helping us get a few more points instead of going away,” said Clarke.

Following his omission from the Nigerian squad, Odemwingie, 31, had launched an blistering attack on his country’s head coach, Stephen Keshi and the football federation claiming they lied in order to drop him.