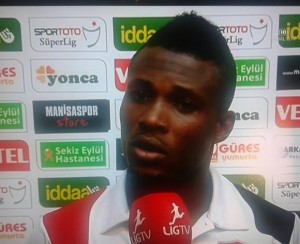 Defender Jerry Akaminko, who is part of Ghana’s squad for next month’s Africa Cup of Nations, was involved in a motor accident in the country on Friday night.

The Turkey-based defender survived with minor injuries as his Infiniti SUV crashed into a taxi, a bus, before veering into the woods in Koforidua.
The accident came just six days before the Black Stars travel to the UAE to embark on a training tour before the AFCON starts in South Africa on 19 January.
It was feared the accident could affect his chances of joining the Black Stars for the training camp in Abu Dhabi.
This comes after doctors declared him fit as he escaped with minor injuries which means he will fit and ready to join Ghana’s training camp.
But the defender is in danger of legal prosecution for his role in the accident as he was accused by by-standers as the cause of the accident because of his dangerous driving.
The Police in Koforidua have started investigations into the matter before deciding the next line of action.
The Black Stars will depart for Abu Dhabi on 4 January ahead of their participation in Africa’s flagship tournament in South Africa.
Akaminko spent four seasons in Turkey with his first club being Orduspor in the Turkish second-tier before joining Eskisehirspor at the start of the season.
In June, he scored on his Ghana debut in the 7-0 win over Lesotho at the Baba Yara Stadium in a 2014 FIFA World Cup qualifier.