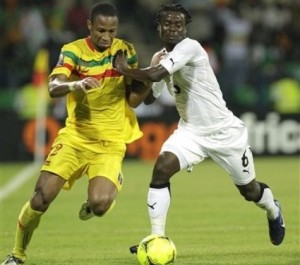 Ghana’s Group B opponents Mali are highly-rated in the world and on the continent ahead of their 2013 Nations Cup meeting.

The Eagles are ranked the 25th best team in the world by FIFA and Africa’s third best.

Ghana ended 2012 in 30th position and also fourth in Africa.

The Black Stars will play Mali at the Nelson Mandela Bay Stadium on 24 January in a repeat of their 2012 Nations Cup Group stage and third/fourth placed play off match.

Ivory Coast are Africa’s best team and ranked 14th in the world.