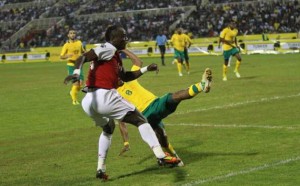 Harambee Stars skipper Dennis Oliech says Kenyans should support new coach Henri Michel to turn around the country’s football fortunes despite succumbing 1-2 to South Africa in a friendly match played at Nyayo Stadium on Tuesday night. Oliech who put Kenya level from the penalty spot before an own goal courtesy of defender Chris Wekesa handed Bafana Bafana victory, told Goal.com Kenya that the team had played gallantly despite going down.

“Kenyans should pick positives from this match. We had a young team out there while a few others were making debuts but we managed to contain South Africa. I still believe we have the potential to do well in coming assignments if those involved (stakeholders) support coach Michel.”

“The match was good experience more so for the young players as it helps the team grow.” The speedy forward added that the team will pick vital lessons from the tie to prepare for the forthcoming regional Cecafa and Chan tournaments.

“It’s unfortunate we lost. South Africa is a strong team who have been together for longer period compared to us. They have good facilities than Kenya and remember they were coming from a big friendly in Poland. I can’t fault anyone because the result reflects the outcome of the match.” The Auxerre striker hailed Kenya FA for organizing the friendly. “We have never played a friendly of such magnitude before and I believe with such high profiled build ups will help motivate the team.”