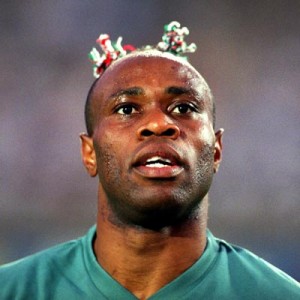 A former Super Eagles defender, Taribo West yesterday implored the current generation of players to conduct themselves with decorum in the build-up to the forthcoming 2013 AFCON in South Africa.

The former Inter Milan FC defence ace made the remark during an interview in Lagos. West told NAN that the recent tantrums generated by Osaze Odemwingie’s exclusion from Stephen Keshi’s provisional 32-man squad for the AFCON was uncalled for. The former defence strongman urged Keshi not to relent in the task of putting a formidable team in place for the Jan. 19 to Feb. 10 continental tournament. West, who also had a stint with Auxerre FC of France, stressed that discipline was the only key to having a cohesive national team that everybody would be proud of. “We need our players to show more commitment to the team and Keshi is ensuring that they do just that because discipline is a key component for a formidable team”.

“In recent times, the level of discipline in the team has been on the decline, but I am sure that with the way things are, our players will have to toe a new path”.

“We don’t need any distraction from anybody; the players should act in accordance with what their coach expects from them and they will be glad they did,” West said. When asked on how it was in his active football days, the 1996 Atlanta Olympics gold winner in football said that their emphasis was purely on the game.

“When we went outside the shores of this country to search for greener pastures, it was not all about money; it was not all about what you acquire. We went there to work and the passion, the determination, the zeal and the commitment was there, but I think it has drastically declined in recent times,” the former Inter Milan defender noted.