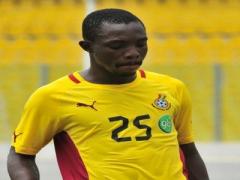 Berekum Chelsea defender Richard Kissi Boateng has played down the severity of a knock he sustained in their Premier League game against Amidaus Professionals last Sunday.

There were fears that the 24-year old was going to miss the Black Stars pre-tournament camping in Abu Dhabi which begins this Saturday.

But in an interview with JOY Sports, the former Liberty Professionals noted that he is fit and ready for the training Camp.

“Although I had a knock in that game nothing shows that I’m not fit and know doctor has confirmed that the knock will rule me out of the Nations Cup”. He told JOY Sports

“I really don’t know why they are saying I can’t join the team for the training camp in Abu Dhabi ,nothing shows that I’m injured because I can see myself fully fit and even preparing towards the Nations Cup”.

The Black Stars will be camping in Abu Dhabi in preparation for the Africa Cup of Nations to be held in South Africa from 19 January.

Ghana is paired with DR Congo, Mali and Niger in Group B at the 2013 Africa Cup of Nations.