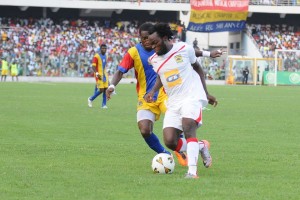 Attacker Yahaya Mohammed misses what could have been his Africa Cup of Nations debut, reducing Ghana’s provisional squad to 25 for this month’s finals.

The Glo Premier League’s top scorer with 10 goals, halfway into the season has been forced out through a groin injury which will keep him out for between three to four weeks.

Ghana coach Kwesi Appiah confirmed the injury and assured the Amidaus Professional player that he will be considered for the future.

“It’s a huge blow for the team, especially me. He has been in very good form and I was looking forward to working with him”.

“The medical team will follow his recovery and I expect him to get well soon. He will be considered again once he returns to full fitness,” Appiah told www.ghanafa.org

No player will be called to take his place as Ghana departs for Abu Dhabi on Friday for pre-tournament preparations.

Yahaya’s withdrawal means the provisional squad of five locally-based players and twenty foreign-based players will see two players dropped when the team is pruned to a final 23-man list for the tournament in South Africa this month.