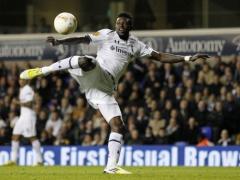 Togo star Emmanuel Adebayor has less than a week to decide whether he will play at the Africa Cup of Nations in South Africa as the January 9 deadline for naming final squads looms.

The gangling 28-year-old Tottenham Hotspur striker apparently retired after scoring the only goal of a friendly win over fellow qualifiers Morocco in Casablanca two months ago.

Initial reports suggested Adebayor had quit the “Sparrowhawks” because of the perennial complaint among Togolese footballers of unpaid bonuses but the national team captain stressed his decision was security related.

He survived an attack on the Togo squad ahead of the 2010 Cup of Nations in Angola in which a footballer and an official were killed by separatists seeking independence for the oil-rich Cabinda enclave.

Tottenham manager Andre Villas-Boas told Britain’s Daily Mail newspaper that Adebayor had not decided whether to accept an invite from Togo coach Didier Six to join the squad for a tough Group D schedule against Ivory Coast, Algeria and Tunisia.

“It is a vulnerable situation and anything can happen,” said Villas-Boas. “I am not going to put myself in a position where I block a player from international duty. We have left it to the player to decide.”

Any hope that the tiny west African nation, which is ranked 16 in Africa and 71 in the world by FIFA, have of causing an upset against seemingly much stronger rivals probably hinges on the presence of talismanic Adebayor.

Although he has found goals hard to come by for Tottenham this season — his midweek strike against Reading was only his second — Adebayor is a consistent scorer for his country.

The star netted in both legs of a qualifier against Gabon that earned Togo a place at the 2013 Cup of Nations and then snatched the goal that brought a shock win over former African champions Morocco.

Togo have named 20 of the 23 players permitted for the tournament and hope Adebayor and goalkeeper Kossi Agassa and midfielder Alaixys Romao, who have shunned call-ups in support of the stance taken by the skipper, will play.

Mali are the only country among the 16 qualifiers still to show their hand with coach Patrice Carteron telling reporters in Bamako he will release a 27-strong provisional squad Saturday.

Cape Verde Islands, Ethiopia, Ivory Coast and South Africa have named final squads, an injury to midfielder Djamel Abdoun has trimmed the Algeria list to 23, and the other 11 coaches have until midnight GMT on January 9 to decide.