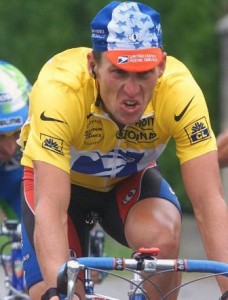 Lance Armstrong, the disgraced American cyclist at the center of the biggest doping scandal in the sport’s history, may admit he used performance-enhancing drugs during his career, the New York Times reported in Saturday’s editions, citing “several people with direct knowledge of the situation.”
The newspaper said Armstrong, 41, has told associates and anti-doping officials he may make the admission in hopes of persuading anti-doping officials to allow him to resume competition in athletic events that adhere to the World Anti-Doping Code, under which Armstrong is currently subject to a lifetime ban.
Such an admission would be a stunning reversal for Armstrong, who has vehemently denied doping for years.
Asked if an admission was coming from Armstrong, Tim Herman, the cyclist’s longtime lawyer, told the Times, “Lance has to speak for himself on that.”
The newspaper, citing “one person briefed on the situation,” said Armstrong has been in discussions with the United States Anti-Doping Agency (USADA) and met with Travis Tygart, the agency’s chief executive.
The paper, citing the same source, said Armstrong is also seeking to meet with David Howman, the director general of the World Anti-Doping Agency.
Armstrong’s lawyer denied his client had talked with Tygart.
An Oct. 10 report from the USADA blasted Armstrong’s involvement in what it characterized as the “most sophisticated, professionalized and successful doping program that sport has ever seen.”
Less than two weeks later, Armstrong’s seven Tour de France victories were nullified and he was banned from cycling for life after the International Cycling Union ratified the USADA’s sanctions against him.