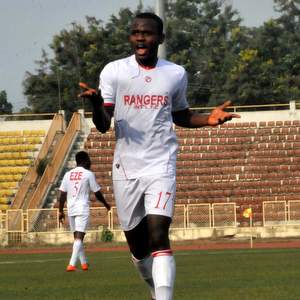 Super Eagles’ right full back, Ugonna Uzochukwu has said the side are on a solid footing to claim their third African title in South Africa.

The Enugu Rangers’ man said for the Eagles to have withstood the barrage of attacks from the Catalonian side showed they are on the path to emerge winners at Africa’s biennial football fiesta.

“The guys tried exceedingly to hold the array of stars from the Catalonian selected to a 1-1 draw. The Catalonian side are unarguably the best side in Europe.

“It clearly showed the Eagles are ready for the Afcon in South Africa and I can confidently say they are way up to claim their third African title.

“I’m impressed by the input of the domestic lads in the encounter and combined with the touch of foreign-based players Eagles will be the team to beat in South Africa,” said the Enugu Rangers defensive midfielder to supersport.com.

Uzochukwu said he does not foresee difficulties coming from Eagles’ Group C opponents.

“As much as one is not running down any side, the Super Eagles are clear favourites to qualify ahead of their other group’s foes.

“People are tipping Zambia to shock Nigeria but I don’t see that happening given the quality of performance the Eagles put up against the Catalonian side.

“Zambia will fight for the second spot with Burkina Faso and Ethiopia.

“I don’t see any hitch for the Eagles at the Nations Cup once the right calibre of players are selected for the championship,” he said.

The Eagles will start their campaign against Burkina Faso in Nelspruit on January 21 before facing Cup holders, Zambia and Ethiopia.