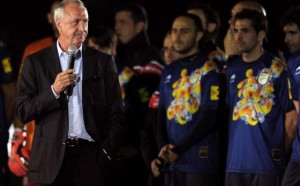 The Catalan national team hosted Nigeria at Espanyol’s Cornella-El Prat in what turned out to be the last game of the Dutchman’s career.

Cruyff, 65, has enjoyed a successful coaching career following his time on the playing field and has coached the likes of Ajax, Barcelona and at present, Catalonia.

– “The willingness of all players to play a game just for the proud to wear the shirt of Catalonia is amazing; he told the national side’s official website.

– Always we will remember the results. The day we played against Argentina did a wonderful match. Everyone played very well and everything was to win and his pride.

– At those times you think you’re playing a game that everyone talks of the Catalan team”.

Cruyff was then asked why he never speaks in Catalan after living in Barcelona for almost 40 years.

“I never do an interview in Catalan because I don’t want to give advantage to the journalist. I want journalists to be him who will have to strain to understand me the man they called said”.