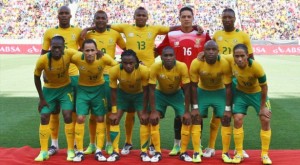 According to Safa media officer Mahlomola Morake, it will be the most important part of Bafana’s preparations for the continental showpiece.

Before their attempt to win the trophy in their back yard, they will play two friendly matches.

The first match against Norway comes up Tuesday at the Cape Town stadium.

The boys of Gordon Isegun take on Algeria at the Orlando stadium January 12.

South Africa was drawn in group A with Angola, Morocco and Cape Verde.