McCarthy is in the last six months of his contract with the Buccaneers, which means that Ajax is within their rights to talk to the player and agent for pre-contract.

Soccer-Laduma sources have confirmed that Pirates have yet to show any indication as to whether they would like to extend McCarthy’s contract, and the player is keen to secure his future as soon as possible. 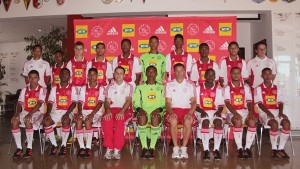 When McCarthy first came back to South Africa from English Premier League side West Ham United at the end of the 2010/11 season, it was with the intention of signing for Ajax. But after training with the club, management dragged their feet in regards to offering him a deal and Pirates swooped to sign the forward.

McCarthy went on to enjoy a great season with the Pirates last term, helping the Sea Robbers lift a second consecutive treble.

This season, he has not contributed as much after being sidelined for a long period with injury.

If Pirates are to retain his signature, they will have to act soon as the Urban Warriors are determined to get their man.