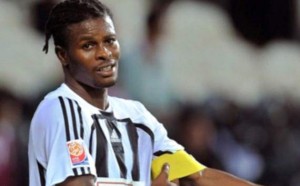 DR Congo captain Tresor Mputu says he is ready to move to England, claiming previous interest from Tottenham and Blackburn.

The 27-year-old TP Mazembe striker claims to have been wanted at Spurs and Rovers earlier in his career, but opted against a transfer in order to continue his development at home.

He is now ready to play in England and is reportedly being tracked by Tottenham, Arsenal and Fulham.
He said: “I have been invited by Tottenham before with Harry Redknapp, and also Blackburn when Paul Ince was in charge, but it did not materialise because I was not ready to come to England. Now I am ready.”

Mputu, who is thought to be valued at around £1m, was banned for a year in 2010 for harassing a referee during a Cecafa Club Cup match.

He is currently preparing for the Africa Cup of Nations, which take place in South Africa from January 19th to February 10th.