Harambee Stars goalkeeper Duncan Ochieng is gunning for a clean sheet in the CHAN qualifier against Burundi over the weekend.

With a 1-0 loss to the Burundians a fortnight ago in Bujumbura, the Stars now have to take a two goal margin win to progress to the next round of qualifiers.

“We are under pressure to win as Kenyans expect victory,” he said. 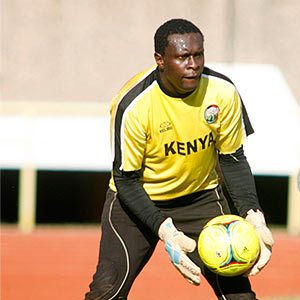 “It is a delicately balanced game as they won and did not concede at home, so it is tricky for us. They will know that to have a good chance, they should score, so it will give them some hope of attacking us. We, on the other hand, must keep a clean sheet to avoid giving ourselves a big job to do. A clean sheet will be very important to us and that is what we are working on.”

In the first leg, the Stars were comfortable in possession and dominated large chunks of the game, and Ochieng expects more of the same when they kick off on Sunday.

“It will be more of the same, we on the ball and they on the break,” he said. “It was frustrating for us last time because we were not able to get the goals after dominating play. Now we have added a few strikers to the team and I hope we will be able to finish the job, he added.

The match will be played at the Nyayo National Stadium, kick-off 1600H local time.