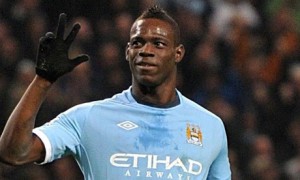 Mario Balotelli scored twice as he made a surprise appearance for Manchester City’s Under-21 side in a friendly against Blackburn.

The controversial Italian might even have claimed a hat-trick, but passed up the opportunity to take any of City’s two penalties in the modest surroundings of City’s academy base at Platt Lane.

Balotelli returned to first-team action after an absence of five games, four of them due to a virus, as a substitute in Saturday’s 3-0 FA Cup win over Watford at the Etihad Stadium. He had been involved in a training-ground bust-up with manager Roberto Mancini just two days earlier but the City boss, who was photographed grappling with the player, described the incident as “nothing”.

Mancini said he was prepared to give Balotelli, who has been involved in a series of controversies on and off the field, “another 100 chances” to reform his ways and downplayed speculation he could leave.

His unexpected outing in the elite development squad’s 4-0 win over Rovers will help improve his match-fitness ahead of this Sunday’s Barclays Premier League trip to Arsenal. Balotelli is challenging for a place following confirmation over the weekend that last season’s top scorer Sergio Aguero has torn a hamstring.

That could keep him out for several weeks, while Samir Nasri has one game of a three-match suspension remaining and Yaya Toure, Kolo Toure and back-up forward Abdul Razak are with Ivory Coast ahead of the African Nations Cup.

Yaya Toure, City’s midfield driving force, has been treated at a clinic for a cough and a fever while at his country’s training camp in Abu Dhabi, but his brother has said he is “back on his feet”.

The defender added on City’s website: “Yaya had a couple of days off. Apart from that, everything is going very well at the training camp and we are happy to be here.”

City were short on senior numbers last weekend with defenders Maicon and Aleksandar Kolarov also on the sidelines with knee problems and Jack Rodwell and Micah Richards long-term casualties.

Portuguese teenager Marcos Lopes was handed a debut off the bench in the closing minutes and scored the third goal against the Hornets. The club have confirmed that, at 17 years and eight days, Lopes became the youngest goalscorer in their history.