Asamoah Gyan will have his first training with the group on Ghana’s second day of pre-tournament preparations for the 2013 Africa Cup of Nations.

The Black Stars captain was excused from the maiden session on Saturday as Ghana started their build-up for this month’s competition in South Africa.

The Al-Ain striker who was attending to urgent family matters reported to the Ghana camp immediately after training on Saturday. 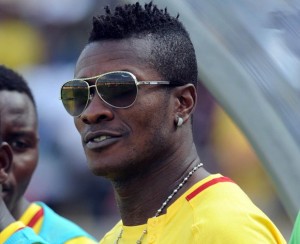 But he will be available when Kwesi Appiah conducts his second training at the Zayad City Sports Complex, Sunday, in Abu Dhabi.

The Black Stars will train in the Gulf region for 11 days before departing to South Africa for the tournament.