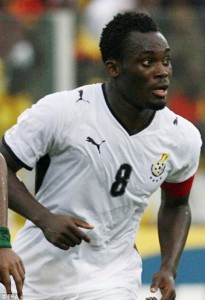 Michael Essien is continuing his efforts to give back to his native Ghana. The Real Madrid midfielder has decided to organise a friendly match between African and European players on 8th June in the Ghanaian capital of Accra. It will be christened the ‘Essien Game of Home’, and will be the second charity fixture he has arranged, following his debut effort in 2011, in which the likes of Drogba, Adebayor, Kanu, Joe Cole and Malouda featured.

“Our aim is to bring world stars, both past and present, to Accra, just like we did in 2011, to raise as many funds as possible for those in need”, Essien told his personal website.

The Ghanaian powerhouse, who’s Michael Essien Foundation, has been running diverse projects in his home country since it was set up three years ago, is extremely excited about the match and will likely invite some of his Real Madrid team-mates to take part.

“I hope to see a great turnout from local Ghanaians, just like in 2011. We are in contact with some big names and I’m sure we’ll be able to take them to Ghana again”, Essien stated.