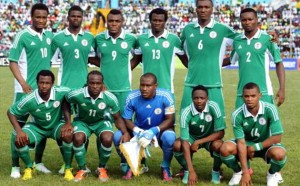 At 24 hours to the official closing lists, all breeders reveal their own. Stephen Keshi followed in the footsteps of Paul Put of Burkina Faso and Angola’s Gustavo Ferrin who published their lists on Tuesday.

In the 23 Super Eagles, there will not be Ideye Brown. The Dynamo Kiev striker has been removed from the group as well as the member of Portland Timbers, Bright Dike.

Meanwhile, the young Kenneth Omeruo will play his first international competition with Nigeria. Six players from the local league are included in this list.It is about Chigozie Agbim, Godfrey Oboabona, Azubuike Egwuekwe, Gabriel Reuben, Ejide Uzoenyi and Sunday Mba.

The Super Eagles of Nigeria played their last preparation match on Wednesday against Cape Verde. The team is expected in South Africa on January 16.