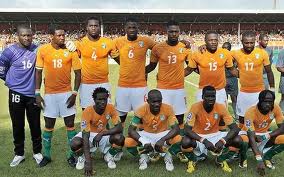 Following the history of football and the Ivorian Football history or the fifth consecutive tournament, Captain Didier Drogba and a star-packed squad must carry the burden of favouritism, which they failed to justify in Egypt, Ghana, Angola and Gabon/Equatorial Guinea.

They have come so close twice; losing penalty shootouts painfully to hosts Egypt in Cairo seven years ago and to Zambia in Libreville last year, and the other two attempts ended in semi-finals and quarter-finals exits.

The situation is all too familiar for the footballers of Ivory Coast less than two weeks before the 2013 Africa Cup of Nations kicks off in South Africa.

South Africa 2013 represents the last throw of the Africa Cup dice for ageing Drogba, who blazed a regular-time penalty well over the crossbar to help Zambia achieve a maiden title.

Ivory Coast have conquered Africa once, defeating Ghana in Dakar 21 years ago in another final settled by penalties, but that was long before the appearance of Drogba, Kolo and Yaya Toure, Didier Zokora and Emmanuel Eboue and a host of them.

These stars are known as the ‘golden generation’ of Ivorian football, but the best any of them has managed so far is silver when it comes to the post-final medals’ presentation.

“Coming to South Africa for the 2013 Cup of Nations will be special for me,” Drogba told Ivorian reporters. “We have twice come so close to winning this tournament”.

“But that does not mean that we can afford to slow down and assume that if we wait long enough the title will be ours. We have learnt from our failures and we are coming this time to win the title and nothing else.”

The whole battle begins on January 19, ends on February 10, and offers a place at the 2013 Confederations Cup in Brazil to the winners, is not so fair on the side of the Ivorian ‘Elephants’.

Not only have they been put in Group D with former champions Algeria and Tunisia and the Togolese team with all to gain and nothing to loose, but tradition hard work for the title favourites.
“It is unquestionably the most difficult group and we got three fearsome opponents,” admits Ivorian coach Sabri Lamouchi. “We were favourites before the draw and still are. Now we must deliver on the pitch.”

While Ivory Coast are undoubtedly the team to beat, there are many other teams capable of collecting the $1.5 million first prize, including Zambia, Algeria, Ghana, Mali, Morocco, Nigeria, South Africa and Tunisia.

Angola and the Democratic Republic of Congo should not be written off either, leaving Burkina Faso, the Cape Verde Islands, Ethiopia, Niger and Togo as the five teams without realistic ambitions of going all the way.