The Al-Ain striker has scored just five goals in his three previous tournaments for the Black Stars despite the team reaching at least the semi-finals on each occasion, but the former Sunderland forward is not worried by the pressure on him to provide goals.

Asamoah Gyan has vowed to turn around his modest goalscoring record in the Africa Cup of Nations when Ghana bid to add to the four continental titles they already have, in South Africa. 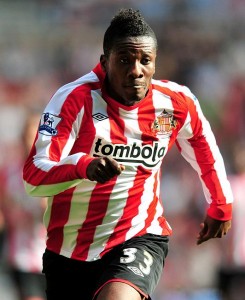 “I’m not disturbed because my ratio of goals with the national team is impressive. It is natural people expect you to score as striker, but it is not always so,” he told Fifa.com.

“Sometimes you have to create the chances for others to also score. I always do my best to help the team to victory.”

He said: “I will no longer take penalty kicks for Ghana. My mother advised against penalties, and since she is no more, I have to heed her advice.”

He added: “I’m very hopeful we can break the jinx and end the long wait for the African title. No team can be underrated at this level. All four sides in the group are strong contenders”.

“We played Mali at the 2012 edition and saw their performance. Niger, though not a big team, has a strong side and can always cause an upset.”

Gyan will be without fellow striker Andre Ayew, as the Marseille man was dropped from the Black Stars after he failed to turn up to the squad on Monday.