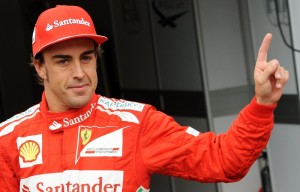 Marko said Alonso is caught up in “politics”, “funny comments” and “psychological skirmishes”, showing he feels the “stress” of the title battle. Alonso interpreted the jibes as an acknowledgement by Red Bull that Ferrari will again be the main contender this year. “I enjoy reading that Red Bull still think we will be the strongest rival for next year!” he wrote on Twitter. “And this even before start testing!! “Flattered ,)” Alonso quipped.

Alonso, however, was not the only driver in Marko’s sights. He also reserved some critique for Vettel’s continuing teammate Mark Webber, who according to speculation may be replaced after the Australian’s latest one-year contract expires.

“It seems to me that Webber has on average two races per year where he is unbeatable, but he can’t maintain this form throughout the year,” Reuters quotes Marko as having told the Red Bulletin. “As soon as his prospects start to look good in the world championship, he has a little trouble with the pressure that this creates. In comparison with Seb’s rising form, it seems to me that Mark’s form somehow flattens out.”