Ernie Els is the only South African golf player up for an accolade at this year’s Laureus World Sports Awards, with the names of the final nominees released on Wednesday. Els, 43 years, was named alongside five other contenders- Ethiopia long-distance runner Tirunesh Dibaba.

The Big Easy lifted his fourth Major title, and his first in 10 years, when he won the 2012 British Open. His performance earned him a nomination for the Comeback of the Year award. 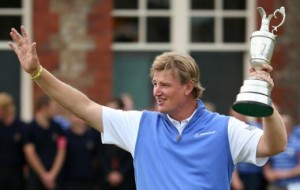