31 Years ago was about how long Ghanaians could fret on when the Black Stars won the Africa Cup of Nations.

Whatever the disappointments of the last three decades, it would be unfair to underestimate the efforts of the current side.

“I’m very hopeful we can break the jinx and end the long wait for the African title,” said Gyan, who at 27 is among the band of twenty-two players in the squad now who were unborn when Ghana last won the title.

Gyan will be making his fourth successive appearance at the Nations Cup but cups have proved harder to come by just like goals. He has scored only five goals in the finals so far.

“I’m not disturbed because my ratio of goals with the national team is impressive,” he said. 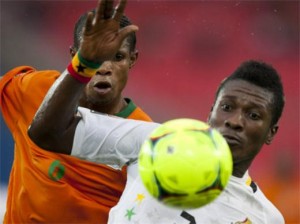 “It is natural people expect you to score as striker, but it is not always so. Sometimes you have to create the chances for others to also score. I always do my best to help the team to victory.”

For Gyan it will not be that easy getting out of the group stages. “No team can be underrated at this level. All four sides in the group are strong contenders. We played Mali at the 2012 edition and saw their performance. Niger, though not a big team, has a strong side and can always cause an upset.” he said.

“I have so much respect for Appiah. He was such a great leader on both ends – on and off the pitch – and so was Mensah. They taught me a lot and with the support of my colleagues, we should deliver the ultimate,” he said.

Many Ghanaians looked and hoped in Gyan to help bring home the Cup in the previous years but now all hope and wait to see what happens in the Afcon 2013 which comes up on the 19th January, 2013.