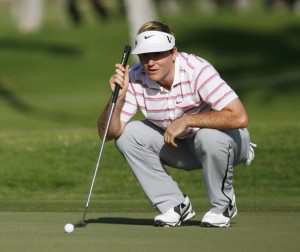 Russell Henley broke a record just two days into his PGA Tour career on his way to a two shot lead at the midway point of the Sony Open in Hawaii.

The 23-year-old putted for birdies on every hole and didn’t drop a shot for the second consecutive round on what was another windy day at the Waialae Country Club.

Henley went in front with a shot into eight feet to a front pin on number two, his 11th hole of the day, with birdies on the fifth and sixth stretching his lead to four shots.

Shooting one over through holes one to six, Langley fought back with a birdie two on seven before three consecutive birdies put him right back in contention. A dropped shot at 11 stopped his momentum but the 23-year-old finished with a birdie four on the last.

“It’s never easy to back up a really good round, I kind of got off to a little slower start,” Langley said. “But it was certainly nice to finish the way I did and kind of get back in it with Russ.

“He played so well, and I was just trying to keep pace as much as I can. To finish that way was really good.”

Scott Piercy is with Langley on 12 under thanks to an eagle on the last which ensured shot a second straight 64 and a blemish-free round.

Piercy is aiming for his third PGA Tour victory and admits he has little knowledge of the duo at the top who are chasing their first.

“It’s Russell something and Langley? I think Russell won when he was in college, right?” Piercy said.

“Hey, they’re playing well. I think I played in five final groups as a rookie and didn’t come through. There’s a learning curve. But maybe their curve is quicker than mine.”