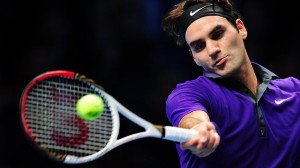 With a trophy cabinet straining at the hinges and a 53rd consecutive grand slam appearance looming, Roger Federer might be excused for feeling a little jaded ahead of his bid for a fifth Australian Open crown.
Not a bit of it, the 31-year-old Swiss maestro said on Saturday, having passed his motivation test during punishing practice sessions in the off-season.
Federer eschewed all warm-up tournaments for the year’s first grand slam, dropping off the radar altogether in favor of a hermit-like training regime and time with his family.
The break, coming off a disappointing U.S. Open and loss of his ATP Tour Finals crown to Novak Djokovic, was seized upon as evidence his competitive fires were beginning to flicker out.
Federer admitted to some trepidation before returning to the practice courts.
“I think it’s always a bit of a test for me going into the practice season,” the 17-times grand slam champion told reporters at Melbourne Park.
“Am I hungry and motivated to wake up, go on the practice courts for hours?” he told reporters at Melbourne Park, before affirming it was all systems go.
“There was not one problem. For me, that was good news. I was eager to improve my game, change it up a bit from all the tournaments I played this last few years.
“To go on the practice court and try to improve my game there. I also go into the gym and get stronger again. I enjoyed it. As long as that’s the case, that means I love (the game) very much.”
Federer has had to compartmentalize his job and family duties since becoming a father to twin girls in 2009.
“Today things for me make sense,” said the Wimbledon champion. “I know why I’m doing them. I know they’re necessary. Sometimes it’s not the thing you want to do every day of the year.
“But I know it’s only a handful of weeks, then obviously you give everything you have.”
Like his masterful technique, Federer has exhibited a similar gift for managing his fitness levels and now trails only South Africa’s Wayne Ferreira (56) and Swede Stefan Edberg (54) for the most consecutive grand slam appearances.
Rafa Nadal’s absence has taken care of one major impediment to Federer’s hopes of extending his record to an 18th grand slam singles title.
However, he faces a tough draw and may need to overcome third seed Andy Murray in a semi-final, continuing a rivalry that had Britain last summer.
Federer beat Murray in the Wimbledon final, but the Briton exacted revenge in the gold medal decider at the London Olympics and brings a new self-belief to Melbourne after ending his long wait for a maiden grand slam title in New York.
Federer faces unseeded Frenchman Benoit Paire in the first round but the prospect of an unenviable fourth-round clash with big-serving Canadian Milos Raonic lurks.
His lack of competition in the lead-up to Melbourne was calculated but Federer conceded it might put him under extra pressure.
“I purposely didn’t play a lead-up tournament so that I’d be fresh for the beginning, hopefully going deep into the tournament,” he said.
“That’s the goal obviously. “But of course maybe somewhere you do feel more pressure going into the first round. Of course nerves play a role.
“Playing well at the right moments only comes with playing enough matches. Not like I haven’t played for six months. I’m ready to go and eager. That to me right now dominates.”
World number one Djokovic is favorite to win a third title in a row at Melbourne, an unprecedented feat in the professional era.
Most believe the trophy will end up with either Federer or Murray if the Serb slips up, but the Swiss said Nadal’s absence had opened the door for all sorts of surprises.
“Obviously with Rafa not in the draw, that might mean for some of the players they only have to beat one of us, of the top three, maybe none,” he said.

“Who knows what the draw is going to do to us. But there could be some guys making deep runs at this tournament.”