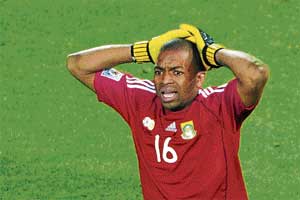 Itumeleng Khume Bafana Bafana goalkeeper got accident by a shot-stopper and now considered among the best on the continent ahead of the 2013 Cup of Nations.

Desperate to support his family financially, he moved from north-western town Tshing to Johannesburg when only 12 for trials with popular and successful club Kaizer Chiefs.

The teenager developed chest problems during an age-limit trial and was ordered to stand beside a goalpost and become a ball boy through the fielded as adefender.

Khune caught the attention of a youth coach and a career that would take him to the national team had begun by diving spectacularly to block balls that missed the target.

He was promoted to the first team squad and after a three-year wait got his chance when first choice Rowan Fernandez was transferred to a German Bundesliga club.

After making his debut against Jomo Cosmos at the start of the 2007-2008 PSL, Khune quickly made the No 1 jersey his own as Amakhosi conceded only 19 goals in the 30-round league.