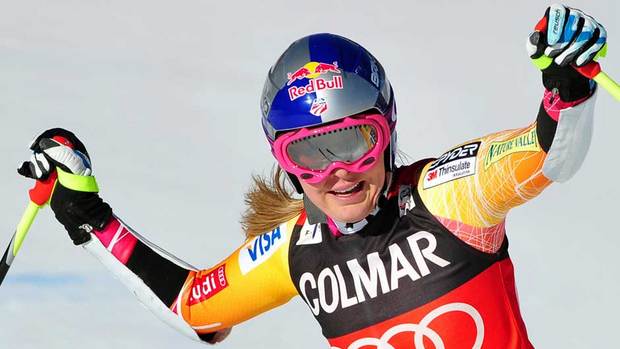 Lindsay Vonn came ever so close to the podium Sunday in St. Anton, finishing fourth just a hundredth of a second out of third.

Slovenia’s Tina Maze continued her total dominance on the Audi FIS Alpine World Cup with the win to join Vonn as one of six athletes to win in all five World Cup disciplines.

Julia Macuso was sixth. The women’s tour now heads to Flachau, Austria for night slalom Tuesday before swinging south to the Dolomites for another weekend of speed racing.
“I was a little disappointed. But it was a solid performance. I definitely know where I can make up the time.

On the bottom of the course I was a little passive. I wasn’t quite as clean as I should have been on some of the left footed turns. But in general my skiing was solid, I’m right there. I just need to be a little bit more aggressive.

I’m excited to race in Cortina. This weekend every day was better building my confidence back up. Cortina is a place where I’ve had success in the past. I think by the time I get there I’ll be in a position to get back on the podium” , said Lindsay Vonn.