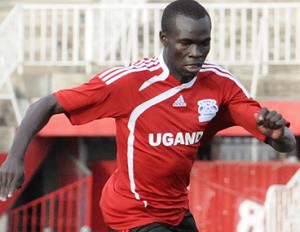 The news has been confirmed by the 20 year old player who has even changed the working place details to L’etoile Sportive Du Sahel on his Facebook page.

“Am officially a player of Etoile Sportive Du Sahel. Let me take this chance to thank all Simba fans and officials for the support u gave me. U were really special to me, god bless u all. Alluta continua”, Okwi wrote on his page. He even posted photographs of him and officials of his new club.

Emma Okwi joined Simba for 40,000 dollars (Shs about 100M) in 2010 on a 2 year contract which was renewed late last year. This means that the ‘the Taifa Kubwa’ made a profit of over 600 million shillings in only two years. Okwi showed his prolific goal scoring abilities when he netted 4 goals in 5 games to become the second top scorer in the 2010 CECAFA edition.

He later became a darling to Ugandan soccer fans when he netted an equalizer in the 2014 world cup qualifier game against Angola in Luanda in June last year. He was later part of the cranes team that won the historic 13th CECAFA Tusker challenge cup in Kampala last year.

His transfer to Tunisia is seen by many soccer analysts as a big step in his career and he also shares the same belief. “It’s really a new challenge and a big step for me in my career”, Okwi observed on his Facebook page.