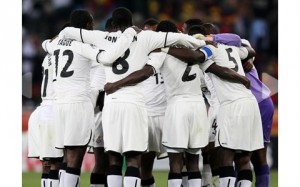 The Black Stars will start their group campaign on 20 January when they take on DR Congo.

On Thursday afternoon, Ghana’s squad arrived in Port Elizabeth for the Africa Cup of Nations 2013.

The 23-man squad together with their coach Kwesi Appiah has checked into their hotel in Port Elizabeth.

The Black Stars touched down in Johannesburg Wednesday evening from Dubai and flew out of the OR Tambo Airport Thursday morning for their official base camp in Port Elizabeth.

Ghana will be based in Port Elizabeth where they will play their Group B matches at the Nelson Mandela Bay Stadium.

They will also play Mali and Niger in the group