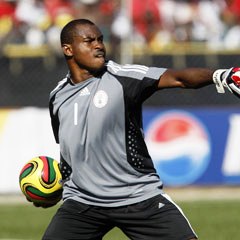 According to supersports, Nigeria’s goalkeeper Vincent Enyeama says that he will be so overjoyed if Nigeria wins the Africa Cup of Nations (Afcon) that at the final whistle on February 10 he will strip to his underpants.

Enyeama has been very consistent since he became Nigeria’s undisputed first choice goalkeeper just after the 2002 World Cup in Japan/South Korea.

He was in the teams that played at the 2004 to 2010 tournaments where the country got to the semi-finals in all but the 2008 tournament where incidentally, Austin Ejide was Berti Vogts first choice. Enyeama regained his place after Vogts departure and was arguably Nigeria’s best player at the 2010 World Cup.

Asked if the team was under pressure to deliver the trophy to Nigeria again since 1994 he says “personally I do not think we are looking at the trophy for now”.

“We want to win the first game, then the next and then the one after that.”

“Nigerians should have faith in us, believe the best of us and pray for us. It is not beyond our abilities to win the competition with God on our side,” Enyeama concluded.

Gervinho scored twice on Monday as African Nations Cup (Afcon) favourites Ivory Coast sent out a strong warning of their potential with a 4-2 win over Egypt in a warm-up international in Abu Dhabi.

However a report also gathered fom koickoff says; But there were signs of some defensive fragility for the Ivorians, who are playing just one preparatory game before they head to South Africa for the 16-team tournament, which kicks off on Saturday. 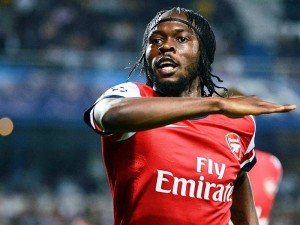 Lanky forward Lacina Traore beat the offside trap just two minutes later to score at the end of a searching pass from Cheick Tiote as the Ivorians turned around the deficit and Gervinho extended the lead to 3-1 just eight minutes after the break.

Again he had a touch of good fortune as he missed the initial cross with an attempted header, but the ball bounced back into his path off the Egyptian defender behind him, leaving Gervinho with an easy tap-away.

Mohamed Nagui brought Egypt back with a close range finish on the hour mark, that caught the Ivory Coast defence static, but Didier Ya Konan restored the two-goal advantage eight minutes from the end.

Didier Drogba emerged for the second half for his 90th cap, but made little impact save for being caught offside five times.

The Ivorians have been training in Abu Dhabi over the last 10 days in preparation for the Afcon, were they are top seeds in Group D. Their opening game is against Togo in Rustenburg on January 22.