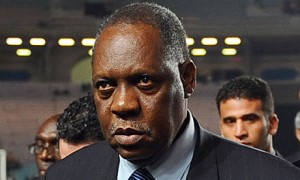 Sports administrators in Mombasa have reacted angrily after Confederation of African Football (CAF) officials were denied access to inspect the Mombasa Municipal Stadium.

The team met Mombasa mayor Ahmed Mohdhar but he could not give them the go ahead saying they had not followed the right channel.

However, Athletics Kenya Mombasa sub-branch chairperson Anisa Abdallah said it was disappointing for Mombasa Stadium fail to benefit from Fifa grants because of political intrigues.

“As athletics fraternity, we are disappointed that CAF team could not access Mombasa stadium simply due to some politics,” said Anisa in a statement.

“This was a golden opportunity for Mombasa County to have a tartan track. We have been clamouring for a tartan track for many years. Let us not bring politics into issues, which are destined to benefit us in future,” added a furious Anisa.

Anisa who is also the treasurer of Athletics Kenya Coast branch said other stadiums in the country were benefiting from Fifa grants and wondered why Coast residents should be sidelined.

“I have realised that we are our worse enemies and yet we keep on complaining of marginalisation. We fight among ourselves and end up losing it all,” said Anisa.

Former Bandari defender Ricky Solomon urged CAF not to shelve the inspection plan and instead liaise with the local FKF officials and the Municipal Council of Mombasa to see the facility is inspected.

“I know Mombasa mayor loves football as he once served at the Treasurer of Mombasa’s Liverpool Football Club and he would be willing to see Mombasa stadium given a new face,” said Solomon.

He said the visit to Mombasa by CAF officials was thought overnight and protocol was paramount to be observed.