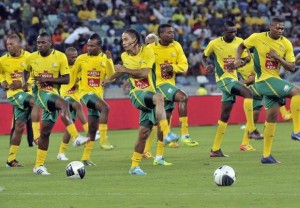 Bafana Bafana’s players will receive bonuses only for reaching the Africa Cup of Nations quarter-finals and final, coach Gordon Igesund revealed on Wednesday.

“The players will accept bonuses only if they get to the quarter-finals and again if they reach the final. There is no money in the first round nor the semi-finals,” the coach stressed.

“This shows a commitment to do well,” added Igesund, whose squad have been under media and public fire after a lacklustre build-up that finished with a drab 0-0 draw against Algeria in Soweto last weekend.

South Africa’s preparations for previous Cup of Nations tournaments have often been bedevilled by rows over appearances fees and bonuses for victories and draws.

AFCON 2013 kicks off on Saturday evening when South Africa confront debutants Cape Verde Islands before a sell-out 90 000 crowd at the National Stadium in Soweto.