Port Elizabeth which is Ghanaian residence has assured the of unflinching supports to the Black Stars during their stay for the 2013 Africa Cup of Nations.

Black Stars will base at in the habour city for the group phase and their compatriots have pledged to make their stay memorable. The Ghanaians Association vice chairman in Port Elizabeth Edward Packson, organized over 100 members to welcome the team on arrival at the Port Elizabeth Airport last Thursday and he told GNA Sport there is more to come.

“We have braced ourselves for the team and will do everything humanly possible to make them enjoy their stay. This is our contribution to ensure the team gets a sound mind for their games.”

Edward being a Civil Technician who has stayed in South Africa Africa for over a decade added that their compatriots from other cities have also pledged to rally behind the team during the stay in Port Elizabeth for the tournament. 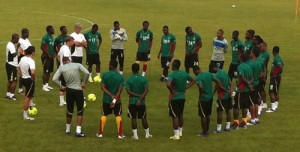 “There are many Ghanaians nearby and other cities in South Africa. There are large groups in Queenstown, East London, and Durban and as far as Cape Town and they have promised to be with us for the games.”

The Black Stars will launch their campaign against DR Congo on Sunday, January 20 at the Nelson Mandela Bay Stadium in Port Elizabeth.