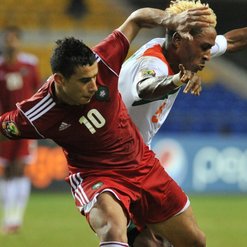 Angola has had terrific preparation for the tournament, with some impressive results, and will be looking to continue this form on Saturday. Morocco might not have had similar preparation, but they are still the favorites for this game. Angola have never beaten them and they will want to keep that record intact after this game.

Morocco’s coach Rachid Taoussi was upbeat about his team’s chances in the tournament: “The motivation of this team is to go as far as possible. The most important thing is to satisfy Morocco and our supporters and perform at the level expected.” There is plenty of expectation back home, especially as Morocco has talents such as Belhanda and Assaidi in their team.

Angola: Djelma – He is a terrific midfielder for this team, as he is the one who keeps everything ticking. His ability to intercept play and put his teammates through with quick, short passes is what will separate him from the other midfielders in action. If he has a good game, expect Angola to dominate possession.