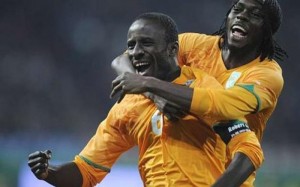 Gervinho volleyed in a late winner to help tournament favourites Ivory Coast begin their African Nations Cup campaign with a hard-fought 2-1 victory over Togo in Rustenburg.

The Arsenal striker turned the ball home in the 87th minute after Togo goalkeeper Kossi Agassa missed a Yaya Toure free-kick as last year’s runners-up – looking to win the competition for the first time since 1992 – sneaked home in their Group D opener.

The impressive Yaya Toure had given the Elephants an eighth-minute lead and also hit the post before Togo drew level on the stroke of half-time through Jonathan Ayite.

Ivory Coast rode their luck on occasion, though, and were indebted to two fantastic saves from goalkeeper Boubacar Barry to deny Emmanuel Adebayor at the start of the match and then Floyd Ayite right at the end.

Togo captain Adebayor looked certain to score in just the second minute after capitalising on a dreadful error by his former Arsenal and Manchester City team-mate Kolo Toure.

However, just as he appeared to have rounded Barry, the diving keeper managed to get his fingertips on the ball and divert it away.

That miss was compounded six minutes later when Ivory Coast took the lead.

Gervinho’s blocked cross from the right fell invitingly for Yaya Toure inside the area and the midfielder side-footed his shot past Agassa with the aid of a deflection.

Togo sought to respond with a long-range piledriver from Serge Gakpe that whistled just wide, but they nearly found themselves 2-0 down in the 44th minute when Yaya Toure struck the inside of the near post. The ball then flew across the area to the unmarked Didier Zokora but, with the goal gaping, he fired his first-time shot over the bar.

A goal then could have ended Togo’s challenge, but as it was the underdogs went up the other end and equalised in first-half stoppage time.

Gakpe’s outswinging corner was missed by Dare Nibombe at the near post but Ayite charging in behind him smashed it into the floor and past Barry.

Ivory Coast fashioned a good chance to re-take the lead at the start of the second half but Didier Konan was denied by Agassa.

Togo thought they had scored on the hour but Dare Nibombe’s header was ruled out following a corner, with the referee ordering the kick to be re-taken.

The Elephants sacrificed captain Didier Drogba for Wilfried Bony as they sought a late winner, and they were rewarded when Gervinho netted, the striker capitalising on poor keeping from Agassa to turn in Yaya Toure’s cross with the outside of his foot.

Sabri Lamouchi’s men almost saw victory snatched away in injury time, though, and it needed a wonderful save from Barry to keep out Floyd Ayite’s diving header.