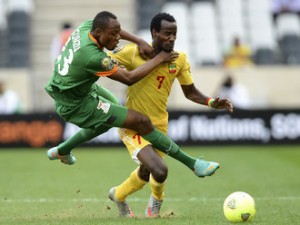 Defending champions Zambia held by Ethiopia and a late equaliser from Burkina Faso to deny Nigeria left Group C finely balanced on day three at the Africa Cup of Nations on Monday.

Zambia are aiming to become only the fourth country to win back-to-back titles but they had to settle for a 1-1 draw in an explosive encounter with the Ethiopians, back in the big time after a three-decade absence.

Ethiopia, one of the founding fathers of African football, were down a man when goalkeeper Jamal Tassew was sent off for a woeful tackle on Chisamba Lungu in the first half.

That provoked disgruntled fans to pelt the pitch with a volley of vuvuzelas.

But Ethiopia, whose star striker Salah Al Din Said watched in despair as he saw Kennedy Mweene save a first half penalty, grabbed a deserved point when captain Adane Girma equalised on 65 minutes.

Zambia coach Herve Renard, in his habitual match day attire of white shirt and jeans, said: “Today, we have to thank our goalkeeper without Kennedy Mweene it could have been a very, very bad result.

“Our fans expected more than we did today, and they are right. Today, it was the fault of the coach. I did not prepare the team well to start the competition we’ll see how things go after the third game.”

On the sending-off the Frenchman reflected: “I saw a replay on the screen and, for me, he deserved to be sent off.”

His opposite number, Sewnet Bishaw, saw things differently, sticking up both for Tadele and the fans’ unruly behaviour.

“The goalkeeper also has to defend, he went to defend the ball, and shouldn’t have been red-carded.

“As for the supporters, that was normal. they felt something unnecesary had happened to their team.”

Bishaw was understandably pleased with the result, saying: “I’m happy as we missed a penalty and drew. This is our first experience after 31 years so, as you see, it was fantastic for our football.”

Nigeria, back at the finals after missing out last year, were next up, and looked to be cruising to a comfortable win when Emmanuel Emenike put them in front before half-time.

But a combination of wasteful finishing and being reduced to 10-men when Celtic defender Efe Ambrose picked up a second yellow card pushed the door open for Burkina.

And in the fourth minute of injury time Lorient midfielder Alain Traore, soon after coming on as a substitute, grabbed the equaliser.

Despite their valiant performance Burkina’s winless run in Nations Cup finals extended to 18.

Nigeria coach Stephen Keshi refused to criticise his players, saying: “I am not going to let anything bring us down. I’m very proud of the boys, who did everything I wanted of them.

“This game is gone and the next game against Zambia is very, very important. I’ll pick up the players and motivate them.”

“All four teams have one point so everything is open,” said Belgium-born Burkina Faso coach Paul Put. “The performance today showed who Burkina are we have quality in the team.

“We were missing some key players so I am very proud of what we did. I was confident of getting a point against Nigeria.

“This was a very good result for us and I am looking forward to the second game against Ethiopia.”

The Nations Cup roadshow moves to Rustenburg, England’s HQ at the 2010 World Cup, on Tuesday with the eagerly awaited entrance of favourites Ivory Coast, who face Togo, and the Maghreb derby between Tunisia and Algeria.