Togo qualified for this tournament by winning a tight two-legged affair over 2012 Afcon co-hosts, Gabon. Togo came through 3-2 on aggregate and had to really resist a late rally from Gabon to book their spot in South Africa. The last time Togo qualified for the Nations Cup, they had to withdraw on the eve of that tournament when some members of their delegation died after being shot at by Angolan dissidents in Cabinda, Angola. 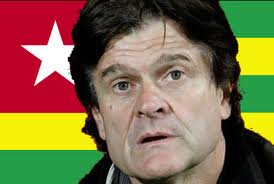 Coach Didier Six is a relatively unknown quantity on the African continent, but he had a distinguished career with the French national team and at club level as a player. Six played for Les Blues for nine years from 1976 to 1984. He earned 52 caps for his country and scored 13 goals as a winger.

As far as his coaching career goes, he has previously been in charge of Strasbourg in France, and was hired for Togo in November 2011 on an interim basis, leading them to the Afcon for the first time since the Cabinda incident at the 2010 competition. 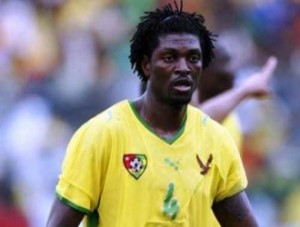 The captain and star EMMANUEL ADEBAYOR

When he is in the team, he is the captain and indisputably the star of the team. But Emmanuel Adebayor, who now plays for Tottenham Hotspur in the English Premier League, is seen as a prima donna in some circles because of his run-ins with various coaches which have included Stephen Keshi, who was sacked as Togo national coach in 2006. He has also had spats with Arsene Wenger and Roberto Mancini, who completely froze him out of the Manchester City team, when he took over.

However, no one can dispute the talent of the imposing striker, whose role model is Nwankwo Kanu. He retired from the national team in 2010 because of the supposed insensitivity of Caf to the plight of the Togolese team that was attacked by Angolan dissidents in Cabinda, Angola. He is continually at odds with the Togo Football Federation on their handling of the national team and has pulled out of the team on numerous occasions.

He has since rescinded that decision and returned from international exile to help his team qualify for the 2013 Nations Cup. Adebayor scored the crucial second goal against Gabon in the second leg of the qualifiers as Gabon scored a late goal which could have sent the tie into a penalty shootout. 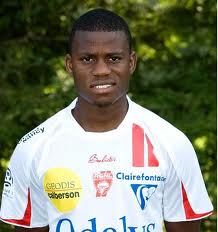 Talented 23-year-old Floyd Ayite plays for Reims in Ligue 1. Ayite is an attacking midfielder who has matured into a fine playmaker for the team. He made his debut in 2008 and has since appeared 15 times, scoring one goal in the process.

Last season, he played a significant part in helping Reims achieve promotion to Ligue 1. He has played for Bordeaux, Nancy and Angers, all in France. His performance at the 2013 Afcon will be a key factor in how well the Togolese play.