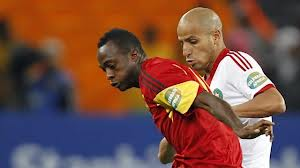 After the clash of the titans this Tuesday between Togo and Ivory Coast which ended with a win of the Elephants, this Wednesday is a new day with the coming back of the teams of the Group A namely South-Africa, Morocco, Angola and Cape Verde.

After the unexpected 0-0 draws between South-Africa-Cape Verde and Angola-Morocco, at 3.p.m we will enjoy the match South Africa-Angola and 3 hours after that, the match Morocco-Cape Verde.

In its 8th participation in the tournament, South-Africa has once won the Cup at home in 1996 and was finalist the following edition.

Cape Verde is the only one in this group who is participating for the first time.

Angola finished 3rd during Afcon 2010 and is taking part for the seventh time when Morocco, a winner in 1976 and finalist in 2004 is in its 15th participation.

What will happen tomorrow between? Will we assist to another 0-0 draw? Only some few hours to find out…