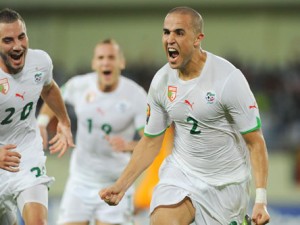 Algeria, outside hopefuls for the 2013 Africa Cup of Nations crown, are suffering a real crisis of confidence up front after the team failed to score in the fifth of their last seven Afcon matches on Tuesday.

Vahid Halilhadozic’s side lacked the drive and quality to properly threaten Tunisia’s goal in their opening fixture in Group D, squeezing just one shot on target during a drab North African derby in Rustenburg. Justifying their status as outsiders in the African Cup of Nations betting.

They were made to pay for their lacklustre attacking efforts as Youssef Msakni curled home a superb goal to earn Tunisia a late 1-0 victory, a result that leaves Algeria with some serious problems if they are to progress to the quarter-finals this winter.

Playing their familiar 4-5-1 formation, Algeria’s midfield struggled to support lone striker Islam Slimani, who had a fruitless evening against two towering Tunisian centre-halves. Slimani never really found room to turn or even have space to breathe with the ball at his feet while none of the midfield showed any propensity to move forward and help out.

It was the same during Algeria’s two build-up matches, where they lost to Bosnia-Herzegovina 1-0 before held to a dour goalless tie with South Africa. Halilhadozic must change his system to give Slimani greater support going forward, and hopefully come their second match against Togo on Saturday the boss will start El Arbi Hillel Soudani alongside his main striker.

Soudani, who plays his football for Portuguese side Vitória SC, scored two of Algeria’s three goals against Libya in qualifying, one being the decisive last-minute strike in the first leg away from home.

The 25-year-old only got 16 minutes against Tunisia not enough to settle into the game but if he starts alongside Slimani on Saturday this side have the potential to capture second place in the ‘group of death’ and maybe even make the semis this winter.