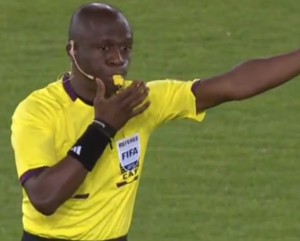 Ivorian referee, Doue Noumandiez will be at the centre of affairs for Thursday’s Group B match involving Ghana and Mali in Port Elizabeth.

The 42-year old, a Pharmacist, will direct affairs from the middle during the Group B day two encounters, which the Stars need nothing short of victory to boost their continued stay at the 2013 Africa Cup of Nations.

Noumandiez, a member of the CAF Elite Referees Panel will be handling his second game involving a Ghanaian side after the African Nations Championship (CHAN) final between Ghana and DR Congo in Abidjan in 2009. The Local Black Stars lost 0-2 to their Congolese counterparts.

Information gathered by GNA Sports indicates that he will be assisted by compatriot Yeo Songuifolo and Burundian Jean-Claude Birumushahu. Algerian Mohamed Benouza will serve as the fourth official.

Niger and DR Congo will battle it out in the other Group B match.