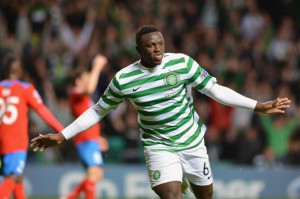 Sir Alex Ferguson reportedly made a personal check on Celtic’s Victor Wanyama on Tuesday night as he considers a bid for the powerful Kenyan.

Wanyama has been one of the stars of the season for the Bhoys and has played a huge part in Celtic’s progression beyond the Champions League group stages.

The Scottish champions have been trying to tie him down to a new deal but, with no agreement on the horizon, a host of England’s top clubs have been tracking his progress.

Now, after receiving glowing reports from his scouts, including his brother Martin – his chief scout – Ferguson took the chance to watch him in action against Dundee United and Wanyama impressed by scoring in a 4-0 win.

Now United are believed to be one of a number of clubs who could yet make a late swoop for Wanyama, with Arsenal, Tottenham and Liverpool all believed to be keeping close tabs on him although it is understood a move for the Celtic ace would need to be made by the weekend.

However, Sky Sports understands that, because Wanyama is Kenyan, his work permit, which is more than likely to be granted, would need to go to appeal as his country are ranked outside the world’s top 70, which is a criteria set in the UK.

So, in order to finalise a deal for Wanyama, a bid would need to be made prior to next Thursday’s deadline and most likely by the weekend to give the process enough time to be completed.