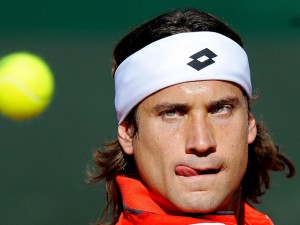 Novak Djokovic moved to within one win of a place in the history books, and fired a warning to Andy Murray and Roger Federer in the process, by demolishing David Ferrer in the Australian Open semi-finals tonight.

Djokovic, who will meet the winner of tomorrow’s second semi between Murray and Federer on Sunday, was simply brilliant as he hammered the Spaniard 6-2 6-2 6-1.

If he emerges victorious at the weekend he will become the first man in the Open era to win three successive Melbourne crowns.

And on this evidence few would back against him.

Asked if he can play better, he said: “I don’t think so. I played incredible tennis.

“I felt very comfortable and very confident from the start.

“I was aware of David’s qualities and this was definitely one of the best performances of my career.

“I don’t expect myself to always play this well. But hopefully I can maintain this level in the final.”

Asked whether he would be watching tomorrow night, he added: “Of course. Who doesn’t want to see a Federer-Murray semi-final? I have two days off to get ready for the next challenge, whoever it is.”

Ferrer is regarded as one of toughest players on the ATP Tour to break down, yet he was swept aside by the world number one, who was on top of his game from the outset.

Blazing winners from all angles of the court, he made the fourth seed look like an also-ran.

The Serbian broke twice in the first set and maintained his level at the start of the second by establishing a 3-1 lead.

Ferrer looked like a rabbit trapped in the headlights and double-faulted at break point to hand his opponent a 4-1 advantage.

Djokovic served it out, helped at 5-2 by a wonderful backhand winner which had the crowd on Rod Laver Arena gasping.

It seemed his level had to drop but, instead, he got better.

He came out on top in a 32-point rally to set up another break at the start of the third and was by now in full flow, two more crushing backhands extending his advantage to 3-0.

Ferrer hit back from two sets down to beat Nicolas Almagro in the previous round but there was never any chance of a repeat as Djokovic broke once more to win a one-sided match in just 89 minutes.