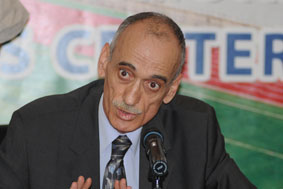 In an interview with the newspaper L’Expression, the president of the Professional Football League returned to the Algerian Fennecs defeat against Tunisia during the first day in Group D of the Afcon 2013.

Mahfoud Kerbadj remains optimistic that the Greens have the means to overcome the Hawks and Elephants.

“I think we were superior to the Tunisians in the first half especially they did not show anything to deserve to win. On the ground, we were well in place, but unfortunately in the second half, the pace dropped a notch allowing Tunisians to regain confidence and a little more daring. It was evident that they were looking for a draw, especially when their goalkeeper whenever lost time. Finally, it took a stroke of genius and a spark for their individual mark. That’s football; there must be a winner and a loser. ‘

“We must first beat Togo and then see the result between Tunisia and Côte d’Ivoire. The Togolese are also condemned to win and it will be a tough match. So, it is up to us to excel and achieve a great match before challenging the Ivoirians in the final of this group D. For my part, I remain very optimistic, because I am convinced that we have a good group of young people who can make a good run. ‘

“I am convinced that both teams are winnable and they are not superior to our selection. For Togo, they showed a pretty face standing up to Ivoirians. As for the team of Côte d’Ivoire, we are better in some compartments. ‘