Mara Yamauchi who is 39 years old announced that she has decided to retire from elite competition. She has decided that now is the right time to move on to new challenges, after becoming Britain’s second fastest ever marathon runner, and competing both in the Beijing and London Olympic Games. Although the 39 years old lady from Oxford explains that , she won’t be giving up running altogether.

“I have achieved my childhood dream of becoming an Olympian, and enjoyed many years training and competing as an elite athlete. To be able to do what you love as your job is a rare and special privilege, and I am very grateful to all the people who have enabled me to do that. I have now decided that it’s time to leave elite competition behind, and instead I will run for enjoyment and to stay healthy.”

“Running teaches us many useful life skills – you can achieve your dreams if you put your mind to it, that hard work reaps rewards, and that perseverance will get you through tough times. I hope I can share my experience of learning through running, with people from all walks of life. Now that building a legacy from the 2012 London Olympics is fresh in our minds, it’s more important than ever to embrace sport and the valuable contribution it makes to our lives.” 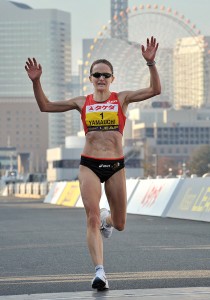 “The most memorable moments of my career were finishing 6th in the Beijing Olympics, and winning the 2008 Osaka Marathon. But the most enjoyable thing was just going out training with friends.”

“Mara has been a great asset to British marathon running. Her second place in 2009 was an outstanding performance. And she’s a thoroughly good egg!”