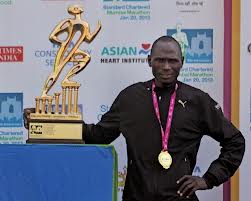 Jackson Kiporp was born 20th October, 1986 in Kenya and is a long-distance runner.

In the year 2012, he was on the four-man shortlist for the Athlete of the year award by Uganda Athletics Federation (UAF) a local body. But he shunned the awards’ gala on Friday and headed to India for the 10th edition of the Standard Chartered Mumbai Marathon.

He however took the right decision for his career where he took 4th place in the race for the award and ended up taking the prize money of US dollars 350,000 Jackson Kiprop had much more to celebrate as he crossed the tape first on Sunday.

Thanks to some chilly weather earlier on, that second-placed Ethiopian Jacob Cheshari also finished inside the previous course record, clocking 2:09:43.

In third place was Elijah Kemboi (2:10:03), who hails from the traditional powerhouse of long distance running, Kenya.

Kiprop also explained how he was training in Eldoret, Kenya with London Olympics gold medalist Stephen Kiprotich prior to the race.