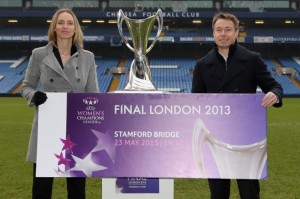 European women’s club football which is the biggest event returns to London for the second time in three years after Fulham FC’s Craven Cottage hosted the 2011 final.

UEFA General Secretary Gianni Infantino said: “The UEFA Women’s Champions League final is the pinnacle of the European women’s club football season. UEFA is proud to stage the prestigious event in London and at Stamford Bridge, giving fans the opportunity to watch and celebrate first-class football in a family-friendly atmosphere.”

Kelly Simmons, director of national game and women’s football for the Football Association (FA), said: “After a wonderful 2012 for women’s football, we are looking forward to another massive year for the game. It’s a hugely exciting time ahead with season three of the WSL, the England women’s senior team taking part in UEFA Women’s EURO in Sweden and welcoming the UEFA Women’s Champions League final back to London. Stamford Bridge is a fantastic setting for this year’s final, and will provide fans with a great opportunity to watch top-level European football in England.” 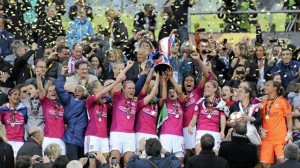 The 2013 UEFA Women’s Champions League final ambassador Faye White said: “Women’s football is growing in popularity at an impressive rate. The UEFA Women’s Champions League final is a fantastic opportunity for fans to come together to see top-quality football played in a prestigious stadium. I hope that it will help inspire a new generation of female footballers in England.”

Chief Executive of Chelsea Football Club, Ron Gourlay, said: “Having witnessed the final in Munich last year, when Lyon won it for the second year in a row in front of over 50,000 fans, it was quite an event.  It’s great to have it here at Stamford Bridge, it’s a fantastic showcase for us and women’s football and it’s a real highlight for the game in the UK.”