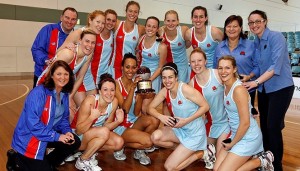 The victory sees England, who has won consecutive Tests against Australia for the first time, claim an insurmountable 2-0 series lead with one Test still to be played in Birmingham on Saturday.

England has wrapped up their first ever series victory over the Australian Diamonds with a 51-49 wins in the second Test at Wembley Arena on Wednesday.

The intense battle came down to the wire as the hosts overcame a slow start to outplay the Diamonds in the second-half, with the Australians guilty of now capitalising on the key moments when the game was in the balance.

Kimberley Ravaillion was rewarded for her outstanding debut on Sunday with her first start at centre as Alexander opted for the same seven that nearly pulled off a comeback in the first Test.

The Diamonds started the must-win match strongly, putting the first Test defeat behind them from the first whistle as they looked to level the series, scoring the first two and last four goals of the quarter to lead 15-11 at quarter-time.

Time ran out on the Diamonds late charge as England held onto the two-goal victory.