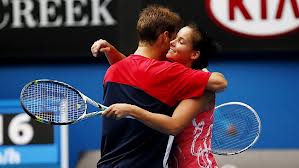 If wildcard pairing Jarmila Gajdosova and Matthew Ebden add a silver finish to their improbable run in the mixed doubles, this year’s Australia Day celebrations could well spill over into Sunday evening across Melbourne Park. 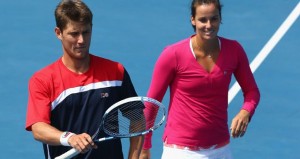 Prior to the tournament, Gajdosova and Ebden had never played together and only decided to team up over thanks to an 11th hour phone call, but out on court they have looked far from strangers.

“I think in about December or Christmas time we talked and I’m glad we decided to play,” Gajdosova said. “He actually texted me and asked me if I had somebody.” I didn’t, so I said ‘yep’.

“He’s a nice person, fun to be around, plus he plays some really nice tennis. He serves well and knows what to do around the court; I help out here and there with some serves too!”

After easing through the opening rounds – including a surprisingly straightforward win over No.2 seeds and last year’s runners-up Elena Vesnina and Leander Paes – the Australian duo came through their first test in the quarterfinals, digging their way out of a hole in the match tie-break to defeat Nadia Petrovaand Mahesh Bhupathi. 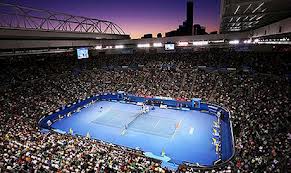 A similarly tight encounter followed in the semifinals, the Rod Laver crowd pulling Gajdosova and Ebden through a few worrying moments before seeing off Yaroslava Shvedova and Denis Istomin, 75 76(5).

However, after taking out one of the favorites, Hradecka and Cermak very nearly came unstuck with the final in sight, coming from a set down to edge out Kveta Peschke and Marcin Matkowski. First to fall were Andrea Hlavackova and Horia Tecau, followed by an even more impressive straight set win over No.3 seeds Sania Mirza and Bob Bryan in the quarterfinals.

Road to the Final: